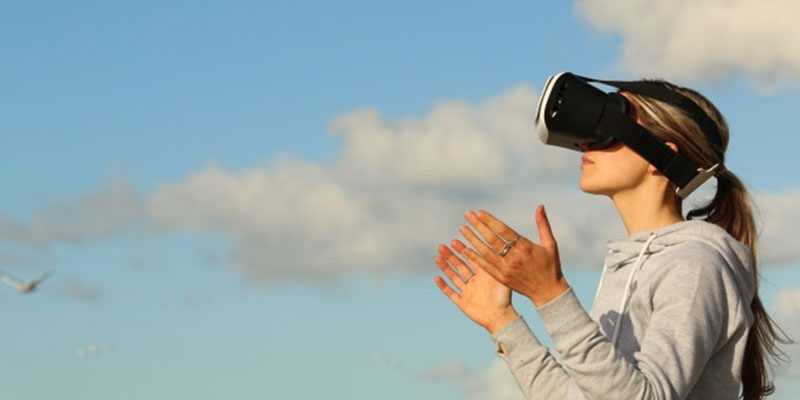 Imagine watching the world go by in Manhattan’s Central Park, scuba diving in the Barrier Reef or exploring the Pyramids of Giza, all from the comfort of your own home. These experiences are now possible with Virtual Reality, a disruptive technology that is allowing people to be transported to a completely new place with the click of a button.

Virtual Reality (VR) offers an effective, highly measurable way for marketers to give potential customers a taste of what they can expect. So now users’ journeys can begin with a journey; using images, sounds and other physical sensations, the user is placed within a virtual world, which they can move around and, in some cases, interact with. This immersion offers a compelling perspective and enables those in the travel industry to provide a kind of ‘try before you fly’ option.

So how does it work? The user either moves around a location on their own accord, or automatically guided around a place or location on ‘rails’. They simply move their phone or iPad around to feel like they’re really there. Or, better still, pop their phone into a VR Headset for a fully immersive experience.

VR lets someone see a place as if they are there, so one could argue that it may be counter-productive. But empirical evidence proves that VR stimulates users to take the chance to visit in person.

VR will never replace traditional travel, but simply enhance travellers’ experiences whilst also meeting their ever-rising expectations. That’s why the use of VR is rapidly increasing as the most forward-thinking companies in the travel industry realise its incredible potential to attract, engage and amaze potential customers. Here are five ways it can be used in the travel industry:

It all starts when a prospective customer is actually deciding on which flight to book; booking engine Amadeus has launched a virtual reality booking procedure in which you are not only able to purchase your plane ticket, for example, but select your seat by taking a walk through the plane itself. This makes the booking process a more interactive, seamless and enjoyable experience.

The next step is choosing accommodation; booking hotels can be tricky sometimes because a picture can be very misleading, as images will always be taken from the best possible angle and highlight a room’s best features. How often does a hotel room actually look like it did in the photo? By allowing a potential guest to take a virtual tour through one of the rooms, they are immediately being given a better idea about the sense of space, light, and ambience of a room with a 360-degree angle.

360-degree photos have been used by most upscale hotels and resorts for a number of years. This experience has been proven to increase time and engagement spent on hotel websites, as well as increase exposure and website rankings.

However, for a truly immersive experience, VR video is the future and offers an incredible opportunity to keep your organisation ahead of the pack. Imagine a mind-blowing first-person perspective of what it’s like to arrive at the hotel or cruise liner, walk into the impressive lobby, view the dining area and facilities and then head up to the room. And perhaps even be greeted by the staff, or even be taken around by the hotel manager or ship’s Captain.

‘Hotspots’ enable the user to interact with their environment to find out more about it. Users simply tap on one (or look at one for a few seconds if they’re using a headset) to find out more about a specific feature. Once activated, hotspots can also be used to buy highlighted products or service – a compelling reason for their inclusion.

The immersive experience doesn’t have to stop with the sale of a hotel, airbnb or cruise liner room. We rarely travel to just stay in our room, after all, but to get to know the location itself. This is why some hotels and airlines offer a virtual experience of some of the highlights the area has to offer tourists. This gives guests a real taste of an area and potentially piques the interest enough to include them in their itinerary and perhaps even book them via the VR experience.

These preview VR tours of local attractions can be a valuable affiliate marketing revenue stream for the airlines, hotels and B&Bs as each customer booking can be directly attributed to the respective tour.

In-flight VR ranges from standalone headsets to complete seat integration, and can be a big differentiating factor for airlines to stand out among their competitors.

Users of the Qantas VR app choose to tour around local attractions on foot, by drone or simply sit in one spot and watch the world go by at Sydney Harbour, Rottnest Island or Mornington Peninsula via their innovative and of-the-moment ‘Meditation Series’. Earlier this year, British Airways trialled the technology at Heathrow Terminal 5.

And First Class passengers on British Airways’ Heathrow to New York JFK flights will have access to “their own “3D cinema in the skies” in the coming weeks. Films, documentaries and travel shows will be available on Heathrow to New York flights, in 2D, 3D or 360° formats. The headsets work even when the user is lying fully flat.

British Airways worked with experts to select a range of therapeutic programmes, including guided meditation and sound therapy designed for customers who have a fear of flying. After all, flying isn’t the most comfortable experience for a lot of people, so giving them a way to escape while they’re strapped into a seat for several hours could result in huge customer loyalty.

The big opportunity for VR will be to help consumers make a decision about where to travel. It can be especially valuable for destinations that may not have a top-tier attraction, instead great natural cultural attractions that can give travellers confidence that this is the place to go. So VR can serve as an introduction to some places ‘off the beaten track’ and, in time, may even boost tourism there.

Amsterdam, a city of just 850,000 inhabitants, had 12 million visitors in 2011, 17 million in 2016 and is projected to hit an incredible 30 million by 2025. Typically, visitors concentrate in city centre locations, such as the Dam Square, the Jordaan, the Red Light District and the same top 10 attractions that they find on TripAdvisor or Google. This tourist congestion, noise and pollution is having such a huge and surging negative impact that the city’s council are applying numerous ‘tourism dispersal’ techniques to attract tourists to visit areas outside the city centre.

A valid, measurable way to disperse tourists would be to create VR video previews of areas such as Noord, Oost and Nieuw-West, and proactively market them digitally and in key tourist touchpoints, such as airports, hotels and train stations. The booking of transport and attractions in these areas could easily be attributed to the respective VR marketing campaign.

YourTour is an award-winning SaaS platform that enables businesses of all sizes to attract visitors via remote VR tours and/or engage visitors on-site with GPS-triggered audio tours, enhanced by AR & Bluetooth.

Our VR tours are available in both static or video 360:

Investing in VR could transform your business, so visit our website or email brett@goyourtour.com for more information.